It’s that time of year again! On November 29th the Angels were on the prowl yet again for CBS’s annual Victoria Secret Fashion Show.

The world-renowned show is famous for its fabulously embellished lingerie, sought after super models and headliner artists that always promise a jaw-dropping show.

“Not gonna lie, the Victoria Secret Fashion Show is like a mini holiday right in between Thanksgiving and Christmas,” said Colleen Ciszek, freshman at UNC.

The show is unique in that it attracts audience members that range from high-end fashion designers to high school girls still sporting their training bras. For women the show highlights up and coming trends for exclusive undies. While the men enjoy the highlights of the gorgeous models. 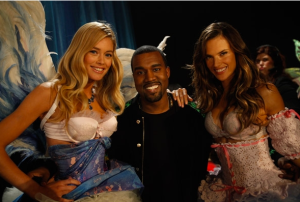 Kanye with some of the angels backstage.

To help keep things interesting for all the middle school boys, to accompany the victorian, under-the-sea & world cultures themes the angels also had a round of walks dressed as heroines from our favorite childhood comics and cartoons.

The runway look that caught the most eyes had to be the over-the-top lingerie set embroidered with swaroksi elements, iconic angel wings and the $2.5 million Fantasy Treasure Bra worn by Supermodel Miranda Kerr (who just had a baby…WHAT?).

Last year the show included performances from Katie Perry and Akon. This year’s artists didn’t disappoint with music from Nicki Minaj, Jay-Z, Kanye West and Maroon 5. The diverse group has been described as an “unforgettable show.”

So whether you’re an avid Victoria Secret follower or you are still in the closet about your little fetish– don’t fret. Tune into CBS to see a replay of the show or press play on your DVR because this year’s show promises to give you wings! 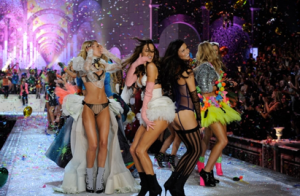 Models have a silly moment on the stage before the show comes to a close!