Just because it’s cold outside and noone’s going to see you locked in the living room sitting by the fire with a hot chocolate in hand doesn’t mean you can’t look cute in the comfort of your own home. Splendid, 291, So Low and Juicy are some of the many designers doing comfy and cozy just like it should be done.

Get the hottest hoodie looks. From oversized and slouchy to tailored and shapely, sweatshirts have never looked so good.

Worried about what to wear on the bottom? No need to fear, anything from so low fold over yoga pants or juicy classic velour pants to LNA slouch pants or Monrow vintage sweats will surely give you that carefree, no-nonsense look while still making a fashion statement- regardless of whether or not anyone’s there to see.

So go out and face the crowds to look for some comfy staples to add to your closet. Sooner than you know it, you’ll be looking fabulous lounging around your home.

With an overwhelming number of fashion trendsetters in the Big Apple, NYC serves as one of the best sources for inspiration when you’re stuck and can’t seem to find your “IT” outfit. Whether you’re dressing for a big night out or simply wanting to look cute to run some last minute errands, Refinery29’s NYC Street Style Snaps will provide you with a never ending supply of ideas for whatever occasion you may need. Yes, North Carolina is a little different than New York City, and while everyone may not want to dress exactly like NYC street hipsters, there are always notes to be taken from them. Visit http://www.refinery29.com/everywhere/fashion/street-fashion/ to see what the big city’s street fashionistas are loving this winter!

If you have a bare wall, decorate your bedroom with a little fashion inspiration board. Fill that blank space up with a bulletin where you can constantly add images for those desperate times where you can’t think of what to wear and need a little help! Here are some cute street style snapshots to give you a couple new ideas.

After 6 episodes, the top contenders for the prize of an editorial feature in Marie Claire magazine, the opportunity to sell their line on Bluefly.com, a $50,000 technology suite by HP and Intel, and a cash prize of $100,000 from L’Oreal Paris are beginning to emerge. While some designers enter each challenge with the sole purpose of avoiding the infamous words “You’re Out,” others are more focused on the finish line.

Seth Aaron Henderson emerged as a strong contender in the first week when his punk rock style earned him a spot in season seven’s first top three. Since then he has slipped through under the radar until this week when his rocker chick mother/daughter outfits won best design.

Mila Hermanovski’s color-blocking has made it’s way to the top three looks twice and earned her a win in the third episode when designers were paired up and given the task of creating a high-end signature look and a look-for-less inspired by another pair’s high-end design.

My favorite? That’s easy, and not just because he’s the cutest thing ever and because I love the fact that he wears short shorts in almost every episode. Never having been in the bottom three, making his way to top three and even winning once, Jay Nicolas Sario’s sophisticated, yet still fashion-forward looks are the closest they come to something I would want to wear.

As far as predicting the top three designers, I would guess Jay Nicolas and Seth Aaron, but the third spot is still up in the air.

If anyone thinks the designers on Project Runway are getting an easy break, you haven’t been hearing the judge’s critiques. Although most times dead on, the judge’s harsh criticisms are never sugarcoated to protect anyone’s feelings. I may sound evil, but to hear Heidi Klum calling outfits “hideous”and  “a mess” in her sweet accent with a big smile on her face is sometimes my favorite part of the night!

Keep tuning in to see if the top runners I named can avoid the judge’s wrath and make it all the way! 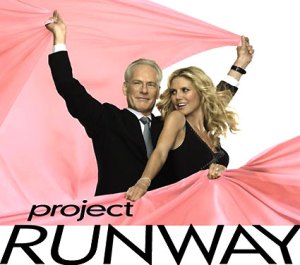 As a fashion freak, anything to do with the industry tickles my fancy, and Project Runway does exactly that. I love everything about this show. As Heidi always says, in fashion, one day you’re in and the next day you’re out. Every Project Runway season you will  find me tuned in to see which designers make the all-star judge panel say wow and which ones make them say “Auf Weidersehen.”

Whether designers are asked to make a beautiful and stylish garment from a potato sack or a stack of newspapers, the judges are never forgiving with those who do not measure up! Heidi’s frank critiques are always entertaining and my favorite shoe and accessory designer, Michael Kors, never shies away from calling the kettle black. And who could forget the budding designers’ mentor, Tim Gunn?! His favorite tip? Just “make it work.” And while a few do make it to the top, others are faced with a serious reality check. What some of these designers consider to be “commercial” is truly comical, and Ping’s unfinished piece that gave everyone a flash of her model’s buttox this season showed the entertainment value that comes as a consequence of each challenge’s time frame.

I always have my favorite designers, and love hearing what the judges have to say about them, and yes, there are always a few designers I could do without (Ping, I’m sorry, but bare butts aren’t my thing!). So, as I follow the show play-by-play and make predictions of who Season 7’s winner will be, get to know the designers and discover your favorite at http://www.mylifetime.com/shows/project-runway/project-runway-designers.

If you have missed the first two episodes, check them out on mylifetime.com!

In addition to our print magazine published twice a semester, we will update this site with snapshots of style on campus, nearby sales and fashion news.

Scope On the Run